Paleoconservatives and the Intercollegiate Society of Individualists

(The above photo shows Ronald Reagan at an ISI Alumni Meeting in 1977, building support for his presidential run.  The group played an important role in Barry Goldwater's 1964 victory at the Republican National Convention, but were unable to propel him to the White House.  They had better luck with Reagan)

In the 1960s, college and university campuses, known for their apathy, began to erupt into political activism.  Rosa Parks, the black woman who refused to move to the back of the bus, inspired many to stand up, or perhaps more appropriately, "sit-in", for racial equality.  Her actions had sparked the Montgomery Bus Boycott, and a young preacher, Martin Luther King Jr., who led the boycott, wrote a book: Stride Toward Freedom.

The next day, 27 young people appeared at that lunch counter to protest the store's actions, and engaged in a "sit-in".  The third day there were 60, and the fourth, more than 300.  Their actions ignited a wave of student sit-ins and protests across the South, and despite beatings, arrests and the sting of fire hoses, the protests continued to grow. 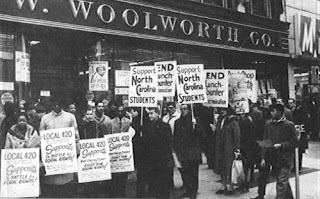 In 1960, John F. Kennedy campaigned on the need for a strengthened Civil Rights Act.  This caused a great deal of alarm to movement conservatives, so they began to launch a counter-attack, hoping to halt the growing Civil Rights Movement.


So while hordes of youth led JFK to the White House, a different horde rallied around the Republicans, with a contrary message.  By 1961, Time magazine was reporting on the new "involvementism"  trend, saying that the most startling part of it was a sharp turn to the political right. (1)

Nonetheless, Kennedy presented his Civil Rights bill in 1963, passed soon after this death, which made discrimination in public places illegal and required employers to provide equal employment opportunities.

The America First Committee, established to protest interventionism and limit the powers of the president, had started a small publication called Human Events, and in the summer, sponsored a journalism school for young right-wing thinkers, in an attempt to tap into the fervour of youth.

Two young men who attended the school in 1957, David Franke and Douglas Caddy, would become key figures in the conservative movement.  Taking what they learned at Human Events, they looked for the necessary wave of discontent to launch a campaign, and found it in the space race.

The Soviets were winning in 1957, prompting the U.S. government to create the National Defense Education Act, designed to enrich math, science and engineering at colleges and universities, where they could draw from a talent pool, for their own space exploration.

However, at the time, anyone working on government projects of a sensitive nature, were forced to take a loyalty oath, swearing that they did not belong to, nor would they join, "any organization that believes in or teaches the overthrow of the United States government ..."  So soon after McCarthyism, the oath did not sit well with many people and in 1960, Senator Robert Kennedy, drafted a bill to drop it.

This was just what Franke and Caddy were looking for.  McCarthy supporters and William Buckley Jr. clones, they sprang into action.  Working through the Intercollegiate Society of Individualists, formed by Buckley and company in 1953, they rallied the masses against the abolishment of the oath.

With petitions from 30 college campuses, including Harvard, (though the first two signatories at the Ivy league school were Atilla the Hun and Adolf Hitler (2)), Congress had to take them seriously.  But not seriously enough, given that 153 schools supported dropping the oath, and they prevailed.

Caddy and Franke would go on to create Young Americans for Freedom, with Caddy acting as their first president, and both would be active in Youth for Goldwater.

In 1962, Young American for Freedom, bestowed its “Freedom Award” on arch-segregationist Strom Thurmond. This is because in the conservative/libertarian orthodoxy prevailing in the 1960s, freedom meant white people’s freedom from federal efforts to interfere with racial discrimination, not black people’s freedom from racism. When Kennedy's landmark Civil Rights Act of 1964 was passed by Congress, the vast majority of congressional Republicans supported it, but Barry Goldwater did not, and he, with strong backing from YAF and other conservative movement organizations,  captured the ’64 Republican Party presidential nomination.

The Intercollegiate Society of Individualists is still in operation, though they've since changed their name to the Intercollegiate Studies Institute, Inc.  They are part of the Paleoconservative or "traditional" conservative thinker movement,  attempting to uphold their European, Judeo-Christian heritage.  The organization also fights what it perceives as political correctness and liberal bias, that they believe is destroying their "freedom".

In a 1989 speech to the Heritage Foundation, the ISI President, T. Kenenth Cribb Jr. stated:


We must...provide resources and guidance to an elite which can take up anew the task of enculturation. Through its journals, lectures, seminars, books and fellowships, this is what ISI has done successfully for 36 years. The coming of age of such elites has provided the current leadership of the conservative revival. But we should add a major new component to our strategy: the conservative movement is now mature enough to sustain a counteroffensive on that last Leftist redoubt, the college campus...We are now strong enough to establish a contemporary presence for conservatism on campus, and contest the Left on its own turf. We plan to do this by greatly expanding the ISI field effort, its network of campus-based programming. (3)

Morton Blackwell of the Leadership Institute, on which Preston Manning's centre for destroying democracy was based, shares those views (Blackwell was also a member of ISI in his youth and the youngest delegate at the Republican convention that won the leadership for Goldwater).  He called universities the last bastion  of the Left.

But what exactly is a Paleoconservative?  The prefix suggests something ancient like the study of dinosaurs.  They only claim to have a "sense of place and of history, a sense of self derived from forebears, kin, and culture—an identity that is both collective and personal."

However, given the religious element in the group, this is probably Biblical, relating to the "curse of Ham", son of Noah.   Noah, upset over an indiscretion of  Ham, who was supposed to be black, cursed all the descendants of Ham's son Canaan. They were to be slaves for eternity and were to serve the other six-sevenths of the population.  Canaan's descendants were said to have populated Africa, meaning that it was the divine decree of God that gave the black people the liability of being enslaved by white people and justified the degradation of the entire race.

Andre Horn, a 13th century Chamberlain of London, said, "Yet 'serfage' in the case of a black man is a subjugation issuing from so high an antiquity that no free stock can be found within human memory." And for the Judeo part of the heritage espoused by Paleoconservatives,  the Babylonian Talmud states that "negroes were the children of Ham, who was cursed with blackness."

The Religious Right movement, was created to oppose desegregation, and the Conservative Movement was very much the revenge of the white man, which is why arch-segregationist Strom Thurmond, was given a "freedom" award.

In 1996, a member of Stephen Harper's  Reform Party,  Bob Ringma, stated in a newspaper interview that store owners should be free to move gays and "ethnics" "to the back of the shop", or even to fire them, if the presence of that individual offended a customer.

Reform was very much an "Anglo" party, which is why they always took such a tough stand against Quebec and immigration.

"... the notion that some Reform members may have strong Anglo-Saxon nativist inclinations is supported by more than merely the background profiles of its leaders, members and supporters. It is supported also by the words of many of its ideological mentors who depict Canada as not only historically an Anglo-Saxon country but also part of a wider Anglo-Saxon culture that is in need of recognizing and re-establishing its heritage."  (4)

When it was discovered by the media that Neo-Nazis had "infiltrated" the Party, the biggest surprise came from the infiltrators, who were shocked that they were being expelled.  White supremicist Al Overfield,  insisted that he told the Reform Party leadership, and was assured that they had no problem with it.  Overfield stated that Reform Party member Harry Robertson admitted him to the Party and that Stephen Harper was well aware of Overfield’s past involvement in far right groups. (5)

Another group angry over their expulsion was the Heritage Front, led by former KKK boss Wolfgang Droege.

"The expulsion enraged the Heritage Front, which saw the Reform Party's policies as very similar to, if not indistinguishable from, its own. How could a party that went on record opposing immigration policies that "radically alter" Canada's ethnic make-up turn around and shun a group like the Heritage Front, Droege asked, when the Heritage Front supports the very same approach? Privately, spokesmen for B'nai Brith and the Canadian Jewish Congress admitted that Droege had a good point."  (6)

It would not be a stretch to refer to the present Conservative Party of Canada, as Paleoconservatives.  They too seek to uphold their European, Judeo-Christian heritage.