The Invisible Hand of the American Enterprise Institute 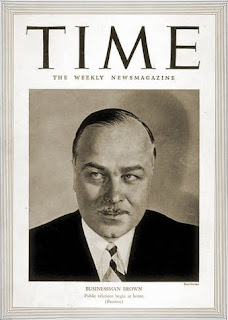 On April 3, 1939, Lewis H. Brown, President of  Johns-Manville Corp., made the cover of Time magazine, as the "outstanding public relations success of 1938".

When Brown had taken his job in 1927, things were much simpler for industry.  Business executives were only accountable to their stockholders, and so long as they could make a profit, they were pretty much left alone.

But with the Depression, when government realized that they would have to intervene in the nation's economy, all that changed.  Not only would business have to answer to government, but also now to labour and the  public.

And they were getting a bad rap.

So they began to hire "consulting" firms to handle PR.  If Ivy Lee, the man known as the "founder of public relations", could turn the most hated man in America, John D. Rockefeller, into the  "great benefactor", anything was possible.

Brown stood out as a leader of corporate PR, not as an adman, but as a corporate executive with a soul, and maybe even a heart.  He promoted the idea of a business selling itself to the public, by developing leaders whose comprehension of public relations was "as mature as their knowledge of their particular trades." (1)

To do this many added public relations experts to their staff, but Lewis Brown handled the task himself.

When he first landed the job as president, he discovered that the company, which produced asbestos insulation, was very unpopular  in most of the 17 towns where it had factories and mines.  So he started a pictorial news sheet for employees, issued a series of booklets such as "This is our policy on the closed shop," and hired Cartoonist Don Herold to do a set of down-to-earth advertisements for local newspapers. Under his direction, J-M plants, were getting known as "good neighbors".

Since much of the insulation went into homes, in 1934 Lewis Brown started the National Housing Guild, to educate local lumber dealers in all the phases of house-building (including insulation) so that a prospective builder could get all his information and all his work at one spot.


When President Brown went to speak at his factory in Asbestos, Quebec, he memorized his entire speech in French (1).  With such attention to detail, Brown not only won over the public, but became the chief spokesman for all Big Business.
Of course there was another side to Brown that the public didn't see.
While befriending his employees in public, in private their welfare was not as important.  In 1984, decades  after Brown's death, Johns-Manville was taken to court for endangering the health and safety of their workers.
In his testimony, Charles H. Roemer, a former employee, described a meeting between Lewis H. Brown and their attorney in the early 1940s, "I’ll never forget, I turned to Mr. Brown, [after he implied that the J-M firm in question, Unarco, "were a bunch of fools for notifying employees who had asbestosis), and I said, ‘Mr. Brown, do you mean to tell me you would let them work until they dropped dead?’ He said, ‘Yes. We save a lot of money that way.'" (2)
As Lewis Brown became one of the leaders of the Conservative Movement, his goal among other things, was to remove health and safety regulations that would make industry responsible for the safety of their workers or the public.  A goal that continues today.
Lewis Brown and the American Enterprise Association
As a business leader, Brown was often invited to provide input into public policy.  Even FDR sought his counsel.  But all that changed on April 8, 1943, when President Roosevelt signed Executive Order 9328, which was implemented in an effort to control wartime inflation.
The order froze prices nationwide on anything that could affect the cost of living, which was pretty much everything, and while prohibiting wage increases, it also outlawed layoffs, except in special circumstances.

In short, it allowed the federal government to control the price of everything you buy, where you worked, and how much you made.

And while corporate America was outraged, the general public was compliant, choosing national security over loyalty to their employers.

So Lewis Brown decided to use the same kind of public relations and education schemes that had made Johns-Manville such a success, on a larger scale, and created one of the movement's first think tanks:  The American Enterprise Association.

He hired a dozen of the country’s top conservatives to staff it, who were charged with the task of putting as many like-minded  people into powerful positions, to meet Roosevelt on his own turf.  Their main goals were to kill the New Deal (including 9328),  promote free enterprise and a strong national defense, and eliminate all personal and corporate income taxes.

Not restrained by the need to play nice, AEA could denounce FDR as a communist, or at best a socialist, and even call for his impeachment, without the business leaders who provided the funding, losing their own "nice guy" reputations.

Lewis H. Brown died in 1951, and William Baroody took over AEA, giving it a new direction and a new name, the American Enterprise Institute, implying an educational rather than a political organization.  He applied for tax-exempt status and got it, allowing him to actively fund raise among the moneyed elite.

Baroody was an aggressive, take-no-prisoners, conservative political activist, with the single-minded goal of placing as many far-right conservatives into the U.S. government as possible.  He himself would become a policy advisor to both Richard Nixon and Gerald Ford, before his death in 1980.

However, his biggest contribution was in  elevating the status of Barry Goldwater and engineering his nomination as the Republican presidential candidate.  Beginning in 1960, he solicited funds from wealthy conservatives, and the first to open his wallet, was Ernest Manning's friend J. Howard Pew,  founder of Sunoco and then the principle owner of the Alberta tar sands.

Pew wrote out a cheque for $100,000 to AEI, no small sum in 1962, and would continue to promote the institute and their campaigns.  In fact, the Pew Foundation remains one of their prime benefactors.

When Ronald Reagan was elected President in 1980, AEI had five centers of study: Center for the Study of Government Regulation; Economic Policy; Political and Social Processes; Legal Policy; and Religion, Philosophy, and Public Policy.

They helped to draft Reagan's foreign policy, through a forum on "War Powers and the Constitution".  They supported the invasion of Grenada, the dispatch of Marines to Lebanon and the Nicaraguan contra policies, that could have had Reagan impeached.

AEI member Christopher DeMuth,  who had served as a staff assistant to President Nixon, became the "deregulation czar", under Reagan, in his new position as administrator of the Office of Information and Regulatory Affairs.

James Miller III went from AEI to the Reagan administration as Federal Trade Commission chairman and than administrator of the Office of Management and Budget.

Michael Novak was appointed by President Reagan to act as chief of the U. S. delegation to the United Nations Human Rights Commission in Geneva.

Novak was also on the board of the Institute on Religion and Democracy (IRD), a neoconservative religious activist group working to undermine progressive movements within the religious community, and has helped to export anti-gay culture.

The board of AEI has included many corporate executives as well as neoconservative leaders including Paul Wolfowitz, Richard M. Perle, Irving Kristol and his son William Kristol.

George W. Bush pulled 20 staffers from AEI, including Canadian David Frum [now an American citizen], who would become a speechwriter for the president.  Frum helped to organize the Winds of Change conference with Ezra Levant, in 1996, in an attempt to unite the Tories with the Reform Party.  However, PC leader Jean Charest, wanted nothing to do with them.  There was absolutely no common ground.

The AEI in Canada

Aside from Howard Pew's and David Frum's obvious connections, the  AEI has also inspired many Canadian think tanks, who often share financial backers.

They heavily influenced one of the first provincial neoconservative governments, that of Grant Devine in Saskatchewan (3).  Michael Novak is a regular speaker at both the Fraser Institute and the Manning Centre for Democracy, and according to Lloyd Mackey, has helped to shape the thinking of Stephen Harper. (4)

Their goals have changed little since the days of Lewis H. Brown.  They are just better organized, have more money, and have gained legitimacy thanks to the media, who often quote from their many reports.