The American Legislative Exchange Council and the Conservative Party of Canada

Stockwell Day won the leadership of the Reform-Alliance Party in 2000, with the help of Canada's Christian Right.  However, by April of 2001, he found himself in the middle of a caucus revolt, led by Reform MP Chuck Strahl.

13 dissidents forced a split in the party, when they sat with Joe Clark's Tories.

Knowing they were in trouble, they called in the Executive Vice-President of the American Leadership Institute, Lou Barnett, to see if he could get them back on track.

The Leadership Institute was founded in 1979 by conservative activist Morton Blackwell, formerly a member of Youth for [Barry] Goldwater.  He was the youngest delegate at the 1964 Republican convention that named Goldwater as their presidential candidate.  The seventeen-year-old Blackwell, spent much of his time coyly spreading rumours about the other candidates.

In 2001,  infighting was threatening to destroy the Reform-Alliance.  Day had proven himself to be an incompetent leader, banishing anyone who opposed his decisions.  Before Barnett arrived in Canada, they were in the process of deciding who among the dissidents should be allowed back in.  A vote was taken on former MP Gary Lunn*, and according to then party president, Neil Reynolds, it was a squeaker.

When asked if he was happy with the caucus vote, Alberta MP Myron Thompson curtly responded, "No, I'm not" and brushed past reporters.  Thompson, a staunch Day supporter, said he would abide by the party decision and refused to elaborate.  B.C. MP Darrel Stinson offered a gruff "no comment", when asked how he felt about Lunn's return. (1)

Barnett was able to take the fractured party and breath a bit of maturity into its caucus, but he may have also felt that with Day at the helm, the problems would continue.  So as part of the reunion, Day agreed to step down and allow another leadership race.

Some party members then went to the National Citizens Coalition to talk their president, Stephen Harper, into running for the job.  He agreed, won, and went on to engineer the takeover of Canada's Tories.

To this day, Harper refuses to reveal who paid for his expensive leadership run.  We only know that top Republican pollster, John McLaughlin handled it (2), so would it be a stretch to suggest that some of the donors may not have been Canadian citizens?  He also refuses to reveal who paid off Peter MacKay's $500,000 debt (3), the bribe used to get MacKay on board with the hostile takeover. 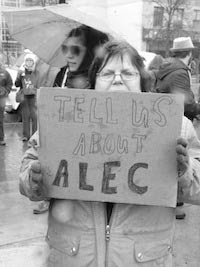 In 1973, Lou Barnett, Henry Hyde and Paul Weyrich, created the American Legislative Exchange Council, an organization that would influence legislative decisions at the state level .  98% of their funding comes from corporations, who benefit from ALEC's enormous influence.  Their top benefactors include Reynolds American Inc., Exxon Mobil Corp., Koch Industries and the pharmaceutical giant, Pfizer Inc. (4)

ALEC holds three conferences a year where state legislators and some of the biggest corporations in the country, mix and mingle, and draft state policy.

The organization also provides a template for a mass deregulation system.  One of the buyers of this template is Wisconsin governor, Scott Walker, hence the sign carried by a Wisconsin protester.

They also drafted Arizona's controversial new immigration law, that requires police to arrest anyone who cannot prove they entered the country legally when asked.  Will curfews and marks on foreheads be next?

There is a corporation benefiting from this law, Corrections Corporation of America (5), a company linked to Stephen Harper, and believed to be behind his new law and order agenda.  If he builds them, they will come.  He just has to promise to keep them filled.

In short, they are driving the neoconservative agenda.

So if you wonder why Lou Barnett would agree to mediate in the petty squabbles of Canada's Reform-Alliance, now the Conservative Party of Canada, wonder no more.  The mostly American corporate sector, now has a free hand in shaping Canadian law, to maximize their profits.

So where does this leave us?  Do you really need to ask?

Stephen Harper hired Pfizer's VP, Bernard Prigent, to head up  the Canadian Institutes of Health Research, the federal agency that distributes about a billion dollars annually for health research.  He's building a taxpayer funded pipeline for the Koch Bros. and at least one super prison for the the Corrections Corporation of America.

And he's just getting started.

In 2011, Gary Lunn was beat out by Green Party leader Elizabeth May.

6. Bernard Prigent, Pfizer’s inside man: PM Harper's appointment of drug company's VP to Canadian Institutes of Health Research is also a registered lobbyist… to CIHR, By Tim Bousquet, The Coast Halifax, February 4, 2010
Posted by Emily Dee at 4:21 AM