The Problem With Conspiracy Theories 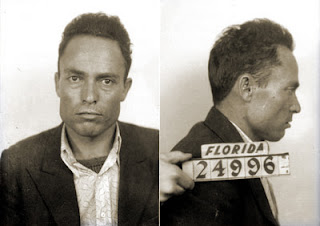 On February 15, 1933, Franklin Roosevelt was delivering a speech in Miami Florida. A lone gunman, described as "a deranged Italian immigrant", named Giuseppe Zingara, opened fire in his bid to make history.

"I have the gun in my hand. I kill kings and presidents first and next all capitalists."

Zingara was clearly gunning for the president, but being short, he was forced to stand on a chair, and would later say that a woman had knocked his arm, throwing off his aim. Instead of hitting FDR, one of the bullets felled Chicago mayor Anton Cermak, who died a month later. Zingara would spend just 10 days on Florida's Death Row, before being executed.

Even today, conspiracy theories abound, with the most popular being that the Masons were behind it (aren't they behind everything?) Original accounts suggested that Zingara was an unemployed brick layer, but were later corrected, because in fact he was just a Freemason.

On March 30, 1981, John Warnock Hinkley shot a .22 caliber revolver six times at Ronald Reagan as he left the Hilton Hotel in Washington, D.C.

Wounded were Reagan's press secretary James Brady, police officer Thomas Delahanty, and Secret Service agent Timothy McCarthy. Hinckley did not hit Reagan directly, but seriously wounded him when a bullet ricocheted off the side of the presidential limousine and hit him in the chest. Hinckley made no attempt to flee and was arrested at the scene. All of the shooting victims survived, though Brady was left paralyzed on the left side of his body.

This incident inspired the Brady Bill, signed into law by Bill Clinton on November 30, 1993, going into effect on February 28, 1994. The guts of the bill was that background checks would be required before the sale of a handgun.

However, another side to Hinkley's story, became fodder for a popular conspiracy theory.  Hinkley's dad was the owner of Vanderbilt Oil, and a staunch supporter of George Bush Sr..  Apparently he had donated to Bush's leadership bid and was disappointed when Reagan got the nod.

What made the story even more bizarre, was that Hinkley's brother Scott was supposed to be having dinner with Neil Bush, the son of then Vice-President George H. Bush, on the evening following the shooting.  Needless to say, it was cancelled. 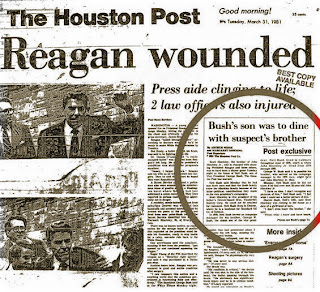 And to add still more fuel to the fire of a "cover-up", the Hinkley family was under investigation for price gouging, that could have seen them being hit with a $2 million fine (1). Apparently, government auditors had met with Scott the very day that Reagan was shot by his brother, which prompted many to believe that John had been put up to the assassination, in an attempt to both remove a political rival, and to halt an investigation into the family's finances.

John Hinkley was mentally unbalanced, and by his own admission, hoped to kill Reagan to impress actress Jodie Foster, a woman he was obsessed with. It's possible that dinner table conversations of the family's dislike for Reagan and fear of the pending investigation, may have made him believe that this would also end his family's problems, but it's highly unlikely that he was coerced by anyone.

Not a Conspiracy Theory

The problem with conspiracy theories is that they can often distort historical facts, and that's what happened to a less known incident that took place in 1933-34. As bizarre as it sounds, a group of wealthy Americans, attempted to stage a military coup to remove FDR from the White House, and replace his administration with a fascist government, led by a military dictator.

Just typing that sounds crazy, however, the facts of the case are a matter of public record; the findings of the McCormack-Dickstein Commission.   The man who blew the whistle on the operation, was then the most decorated marine in the country, Major General Smedley Darlington Butler, who was to be FDR's replacement. (2)

Butler reported that on July 1, 1933, two American Legion officials visited him at his home, Bill Doyle, the commander of the Massachusetts branch, and Gerald C. MacGuire, former commander of the Connecticut department.  Both decorated veterans, they initially only wanted Butler to convince WWI vets, to force the president to maintain the gold standard.

They knew that he was already involved with the Bonus Army, a populist group attempting to have their promised bonuses as veterans of WWI, paid early, and hoped to convince him that in a position of power, he could accomplish that mission.  They simply wanted an additional requirement, that the bonuses be paid in currency backed by gold.

Butler was told that they had a lot of financial backing and could make it worth his while.

Of course they weren't really there as advocates for vets, but as representatives of the banking industry. MacGuire was in the employ of Grayson Mallet-Prevost Murphy, a leading New York brokerage firm, and Doyle was with JPMorgan.  Wall Street not only opposed FDR's elimination of the gold standard but also his plans to nationalize the federal reserve. (3)

Testimony from the McCormack-Dickstein Commission revealed that the notion of a fascist takeover, was not a 'cocktail party conspiracy' as some suggested, but a very serious attempt by Wall Street, to take control of the country.

A JPMorgan partner, Thomas Lamont, had delivered a speech to the Foreign Policy Association, in which he praised Benito Mussolini, and suggested that Fascism, as an economic and political policy, worked.


“We count ourselves liberal, I suppose ...  Are we liberal enough to be willing for the Italian people to have the sort of government they apparently want?” asked Lamont.  Fascism, or some variant of it, he said, was not to be ruled out as policy for the United States. (2)

It was also revealed that Morgans had established a fund to market $24 million in securities for Mussolini.  However, while the Committee determined that Butler's accusations were correct, no one was charged.

It's hard to say how history would have unfolded, had the coup been successful.  I mean, after all, are Americans not now being governed by the corporate sector, especially the banking industry?  Are Canadians not?

Conspiracy theorists like to link Giuseppe Zingara's attempt to assassinate FDR, with the House of Morgan, and often include it when writing of this failed coup.  They also try to attribute the entire story to the House of Bush.

But if we just relate the facts, they speak for themselves.  Corporate America was drawn to Fascism at a time when many others felt that it was the best system to fight against a Communist threat.  This was before Mussolini's invasion of Ethiopia, and the Holocaust.

George W. Bush's grandfather, the late US senator Prescott Bush, did make his fortune financing the Nazis, no doubt with the same belief that Fascism was the answer.  Scott Hinkley did plan to dine with G.W.'s brother, and George H. Bush did attend a Carlyle Group meeting that included Bin Laden’s Brother, Shafig bin Laden, on the morning of September 11, 2001.

Those are the facts.  But none of that means that the Bush family supported the Holocaust, conspired to off Reagan or plotted the terrorist attacks on the World Trade Centre.

There is enough real evidence of wrong doing without going off into too many directions, making even known facts, appear to be nonsense.

Not Fascism But Corporatism

Everything about this conservative movement cries Fascism, but as soon as you suggest that they are Fascists, you are accused of hyperbole.  However, Mussolini himself referred to Fascism as "Corporatism", and that's a more comfortable term to use, if we want people to start paying attention.


The main unifying principle of classic corporatism was the idea that Marxist or Dickensian visions of class struggle could be avoided if, somehow, corporate owners and managers, agricultural interests, and urban laborers could be brought together cooperatively under the benign auspices of government. Mussolini's contribution to the evolution of the older corporatist model was to organize a political party devoted to that principle, but with a somewhat more forceful vision of the government's role. Mussolini believed that the otherwise intractable and irreconcilable conflict between management or capital and labor could be resolved, or at least controlled, if they could be brought together in a "corporation" under state control. Fascism was seen as a way of binding together the disparate elements of society and thus strengthening the whole, but it violated an ancient, Aristotelian precept of justice under the Rule of Law by tolerating an involuntary conscription or elimination of those inclined to dissent from this political economy model. (4)

Paul Krugman in his book, The Conscience of a Liberal, suggests that the "new" Conservative movement, which is the antithesis of cultural conservatism, began in the 1940s.  However, others believe it began in the 1920s, which was the era of the "shirts".

Brown shirts, black shirts, green shirts, blue shirts; all wore the uniform of Fascist supporters.  In many ways the Alberta government of William Aberhart was a kind of benign Fascism (though it was based on the notion of a Jewish Conspiracy).  When Ernest Manning took over the party, he adopted the philosophies of the American Conservative Movement, with the help of his friend J. Howard Pew.

Fueled by anti-Communist/anti-Socialist sentiment and the belief in an Anglo Judeo-Christian hierarchy, under corporate rule; the ideology of the movement has only changed slightly, mainly in the people they hate.  It began with Jews, then blacks, and finally Muslims, but has always included feminists, humanists, liberals, "immigrants" and multiculturalism.  In Canada we are also now seeing an increase in native bashing, spurred on by Sun TV and their "white people" against "Indians" rants.

Historian Peter Viereck once said of the movement, "Ethnic intolerance only decreases as ideological intolerance increases."  The movement has seen its highs and lows, coming to within a hair of hitting bottom, but when they realized that anti-Semitism and segregation, etc. could result in their destruction, they stepped back, though grudgingly, then set out to find new prey.

They need what Todd referred to as the disparate elements of society; those who harbour the prejudices, in order to create the waves necessary for success.

Many in the media are now realizing that the Harper government has shifted policy to better reflect Western political views.  But this goes beyond the history of his Reform Party and simple "western alienation".  This thesis will show a direct and continual link between the American and Canadian "new" conservatives, and by using facts, not conspiracy theories.

We have a concise history of the CCF/NDP, Liberals, Bloc and Tories; but where did Harper's Conservatives come from?

I know and this is me sharing.

4. From Constitutional Republic to Corporate State: The Federal Reserve Board, 1931-1934, By Dr. Walker F. Todd