In 1922, a political group was formed called the Sentinels of the Republic, whose aim was to stop federal encroachment on big business.  Of course that's not really how they sold it, but instead vowed to "stop the growth of socialism" and "prevent the concentration of power in Washington through the multiplication of administrative bureaus under a perverted interpretation of the general welfare clause".

The Sentinels was actually a right-wing front group for the corporate sector, formed to handle the PR against any government legislation that might impede their ability to become filthy rich.  Or should I say filthier?

One of their first campaigns was to oppose Child Labour Laws, framing it as concern for poor families whose children must work to keep them fed, and stating among other things that they "would prevent children from doing chores at home", and was "socialistic, communistic and Bolshevistic."  A "Commie plot"
Those advocating for children knew what they were up against.  According to Time Magazine in January of 1925:

Mrs. Carrie Chapman Catt, Honorary Chairman of the League of Women Voters, told her pro-Amendment following: "The amendment is as good as dead and buried and the obsequies performed, unless something is done about it and done quickly." Experienced observers were inclined to confirm her prediction. The opponents of the Amendment have succeeded to a marked degree in generating a real fear of its consequences. Fear is a tremendously important political asset ... In pushing the idea of the evil consequences of the Child Labor Amendment to the fore, its opponents have placed its proponents entirely on the defensive. (1)

A classic strategy of the Right.  The Sentinels were part of the noise and their efforts resulted in squashing the Amendment, meaning that companies could continue to exploit children. 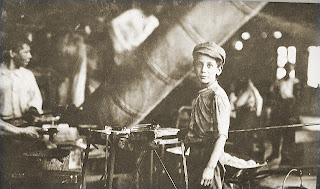 One of the ﻿financiers of the Sentinels of the Republic, was J. Howard Pew, the man who helped Ernest Manning with the conservative takeover of the Social Credit Party in Alberta, and who had become a close personal friend of the Premier's.  Pew is also the man, through his Sun Oil (Suncor), to give Canada the tarsands.  A gift that keeps on giving.
The Sentinels would continue to challenge everything from the New Deal to the creation of the Department of Education, until it was determined that they also had a dark side.
According to Our Magazine "The Sentinels of the Republic were a fascist front group funded largely by the du Ponts, the Pitcairn family and J. Howard Pew."  Gerald Colby says in his book: Du Pont Dynasty: Behind the Nylon Curtain (Lyle Stewart, 1984) that:

... the Sentinels of the Republic [were] an anti-Semitic organization which constantly warned the country of "the Jewish-Communist" menace. In 1936 the Senate Lobbying Committee  released Sentinels' files revealing fascist sympathies. "The Jewish threat is a real one…. I believe our real opportunity lies in accomplishing the defeat of Roosevelt." wrote its president, Boston banker Alexander Lincoln to Cleveland Runyon, who replied that the people were crying for leadership: "The Sentinels should really lead on the outstanding issue. The old line Americans of $1,000 a year want a Hitler."

Historian Peter Viereck, in a 1955 essay, attempted to piece together the elements of the radical right, and determined that the missing link was Father Charles Couglin, the controversial priest who was a supporter of Adolf Hitler and a sworn enemy of FDR and the New Deal.
When on a tour of the United States in 1935, to help spread the gospel of Social Credit, Alberta premier William Aberhart, met with Coughlin, coming away with a favourable impression. "He has a keen intellect and is absolutely fearless. He has a correct appraisal of world conditions."  (2)
We have to remember that Social Credit was the only political party to be based almost entirely on the notion of a Jewish Conspiracy (3), and while Aberhart himself claimed not to be anti-Semitic, his sermons suggested otherwise.

Personally, I have little doubt that in working through Jews, the Jewish financial group has sacrificed its own people on the altar of its greed for power and this group is preeminently responsible for the poisonous anti-Semitism which is rampant in the world today. (5)

Aberhart also published three articles written by Father Coughlin in his Social Credit Chronicle, a paper he created to counter what he deemed to be bias against him from the mainstream press.
However, while Viereck saw Coughlin as the missing link that tied the radical right together in the United States, it was actually John Howard Pew, who began the link that tied American Conservatism to the new Canadian Conservatism.
A close friend and confidant of Aberhart's successor, Ernest Manning, Pew had a huge influence on Manning's political theories, and according to the Anti-Defamation League, Pew himself was anti-Semitic, helping to finance not only the Sentinels of the Republic, but several other "conservative" and anti-Jewish causes. (6)  Many of these operated as part of the Christian anti-Communist Crusade.
However, Pew also strengthened the idea of a right-wing infrastructure.  A myriad of think tanks and advocacy groups whose purpose was to promote conservatism while tearing down liberal ideas.
He has been called a philanthropist; a heavy contributor to non-profit groups.  However, following is a list of some of the those groups who benefited from Pew's generosity.
America First Committee - An isolationist group that lobbied the U.S. government to stay out of WWII, and leave Hitler alone to do his job, which was to destroy Communism.
National Association of Manufacturers: A fascist-linked network of industrialists who were at the heart of many anti-New Deal campaigns. (7)
Christian Freedom Foundation - Sought to "rally the support of Prostentant clergymen for rugged individualism" and for years was "supported almost entirely by J. Howard Pew of the Sun Oil Company and members of his family.  They have contributed well over a million dollars to its operation." (8)
The Foundation for Economic Education - Formed in 1946, it was described as an extremely conservative organization that issued a "huge volume of material aimed at overcoming state interventionism".  Pew was not only a major contributor but was also on their board of trustees.
Christian Economic Foundation - After failing to move the National Council of Churches to the far right, Pew helped create the CEF. In the 1960s, it sowed the seeds of the Christian Right by sending its free magazine, Christian Economics, to clergy across the U.S.
The John Birch Society - And Anti-communist organization still involved with the conservative movement today.
The National Review - Paper of William F. Buckley Jr.
American Opinion magazine - described by the ADL as a radical right, extreme conservative publication, it was the official magazine of the John Birch Society.
Young Americans For Freedom - Activist group that helped to create the Leadership Institute, on which Preston Manning's Democracy centre was fashioned.
Intercollegiate Society of Individualists - A Paleoconservative group that keeps book lists.  Those young conservatives should read and those they must avoid.
Though J. Howard Pew died in 1971, his Pew Foundation continues to support right-wing causes, including:
American Enterprise Institute: A conservative think tank founded in 1943, that became a home to arch-conservatives like Paul Wolfowitz, Richard Perle, David Frum, Dick Cheney, and more.  Both Ronald Reagan and George W. Bush plucked staff from the AEI
The Heritage Foundation: Created in 1973 by Joseph Coors, and headed by people like Paul Weyrich.
The British-American Project for the Successor Generation: Founded in 1985 by devotees of Reagan and Thatcher, it grooms right-wing U.S. and British youth as leaders.
The Manhattan Institute for Policy Research: Founded in 1978 by William Casey, who later became Reagan’s CIA director, it promotes privatization, deregulation and cuts to social welfare programs.

It has been said that the conservative movement is very linear, and visiting right-wing sites, many associated with the Tea Party, it's hard not to agree.  The goals are almost identical to those of similar groups established decades ago.  Several still exist and others have seen a revival.

The Sentinels of the Republic are back, and Republican Senator Jane Cunningham, wanted to roll back Missouri's child labour laws suggesting that they are infringing on parental rights.  She should meet Kelly Block.

We only began really paying attention to Canada's conservative movement, when Stephen Harper was named prime minister.  However, his victory was the culmination of sixty years of hard work.


There will always be dissident voices heard in the land, expressing opposition without alternatives, finding fault but never favor, perceiving gloom on every side and seeking influence without responsibility. Those voices are inevitable.  But today other voices are heard in the land—voices preaching doctrines wholly unrelated to reality, wholly unsuited ... We cannot expect that everyone, to use the phrase of a decade ago, will "talk sense to the American people." But we can hope that fewer people will listen to nonsense. —Excerpt from text of undelivered speech scheduled for presentation in Dallas, Texas, on November 22, 1963, by the late President John F. Kennedy.

8. Danger on the Right: The Attitudes, Personnel and Influence of the Radical Right and Extreme Conservatives, By Arnold Forster and Benjamin R. Epstein, Random House, 1964
Posted by Emily Dee at 4:33 AM