The Canadian Manifesto: 2. "Signaling" For Good and Evil 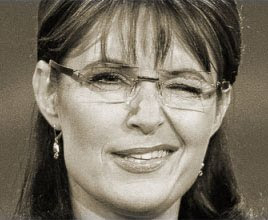 Messaging and carefully crafted language, has always played a key role in the neoconservative movement. From Leo Strauss's hidden dialogue [Plato] to Preston Manning's calculated ambiguity, speech is used not to inspire, but to manipulate, obscure, galvanize and even incite.

Michael Lindsay, in his book Faith in the Halls of Power, refers to an element of this as "signaling", and says that it is an important tool used by Evangelicals to send a message to other Evangelicals, without spooking secular society.

From VeggieTales to Airport Signs

Lindsay provides several examples, beginning with the producers of the Christian children's series, VeggieTales.  Shown on NBC, Phil Vischer and Michael Nawrocki, the show's creators, were upset to learn that the network's policy forbid any references to God.

Vischer said that  he understood NBC's wish to remain religiously neutral, so instead incorporated signals, the most prominent being the wink.  "We wink when we talk about God.... It's a way for us to say [to the evangelical audience] 'We know you're still with us and thanks."' (1)  Does this explain Sarah Palin's infamous wink?

Another example of signaling comes from the popular Irish group U2.


U2, the popular rock band from Ireland, excels at signaling. With a record twenty-two Grammy awards, the musicians have used their public platform to advocate for various Christian concerns, including the Make Poverty History campaign and lead singer Bono's DATA campaign, focused on debt, AIDS, and trade in Africa.

In 1987, U2 released The Joshua Tree, which featured the No. 1 hit single ‑ "I Still Haven't Found What I'm Looking For." In both Hebrew and Aramaic, "Joshua" and "Jesus" are closely related, and the album title directly alludes to the cross of Jesus Christ.  The cover for the 2000 album All That You Can't Leave Behind, features an airport sign with 'j33-3," which alludes to Jeremiah 33:3.   As Bono explains, "That's Jeremiah 33:3. The Scripture is 'Call unto me, and will answer you.' It's celestial telephony. (1)

An example of signaling for good.  As Lindsay says: " If an entertainer is trying to mobilize fellow evangelicals to watch his movie or listen to her song, signaling can be an effective way to indicate their shared identity without potentially turning off non‑evangelicals."


"Canada is a Northern European welfare state in the worst sense of the term..." Stephen Harper in 1997 speech to the Religious Right group, The Council for National Policy.

Francis Schaeffer, author of A Christian Manifesto, which has become the blueprint for the Religious Right movement, finally unlocks the mystery.

It is an example of signaling.

According to D. Michael Lindsay:


When a speaker cites Francis Schaeffer, [those] who do not recognize the name miss it, but for those in the know, it signals the speaker's evangelical allegiances. The message is subtle, but strong for those who can hear it. (1)

Stephen Harper did not have to cite Schaeffer, but those in the know certainly got it. From Schaeffer himself: 'We of Northern Europe (and we must remember that the United States, Canada, Australia, New Zealand and so on are extensions of Northern Europe) ...' (2)

The Nordic countries of course.  Schaeffer's son, in his book Crazy for God, reveals that the movement is about race as much as religion.  Sarah Palin plays the race card in her new book and the Reform Party was notorious for racial slurs, or what former Reform MP, Jan Brown, called "The rampant racism of the God squad." (3)
The following picture is quite telling: 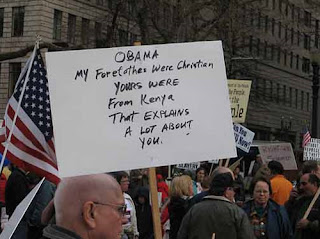 Christians against people from Kenya, aka: black people.  However, the sign also speaks to something else.  Ignorance.  Look at how he spells 'forefathers'.

Schaeffer's Manifesto actually inspired the creation of the Council for National Policy (where Harper spoke), along with many other activist groups, including Focus on the Family, founded by James Dobson.  According to Schaeffer's son Frank, Dobson bought 100,000 copies of the Manifesto to distribute to his flock. (A Time for Anger)

FoF is a good one to focus on (pardon the pun), since it helps to merge us all into this Northern European enclave.  In 2005, the Montreal Gazette, using the financial reports of the parent company, discovered that Dobson had contributed 1.6 million dollars to the Canadian spin-off, once headed up by Stephen Harper's former chief of staff, Darrel Reid. (Reid is now with the Manning Centre)

Dobson also spent thousands of dollars, placing radio ads, with more than one hundred Canadian stations, against same-sex marriage, bolstering Stephen Harper, who was running on the same thing.

This isn't about their religious beliefs, which they are allowed to have, but the fact that powerful American organizations are interfering in our politics.

Turning to my bothers and sisters across the pond, (me signaling to my "comrades".  Wink, wink), they too are concerned with Dobson's meddling.

In Australia, the group was started by Glenn Williams, a fire and brimstone preacher, turned political activist.  Through Dobson, FofF is trying to establish censorship laws, along with the usual anti-abortion, anti-divorce, anti-gay rights, anti-evolution .... yada, yada, yada.

Heading up the censorship campaign in Australia, is Focus's Bill Muehlenberg. (In Canada, it's Charles McVety).  As Australian journalist  Peter Johnson points out (November 1, 2003), while FoF Australia poses as a family friendly organization, their goals are far more political.


Scratch the surface of FOFA, however, and a fully-developed Religious Right ideology is immediately laid bare. This becomes especially clear when we look at the question of censorship. FOFA publications regularly emphasise the addictive nature of pornography, comparing its effects to those of nicotine or alcohol (Family Forum, Feb. 1997, 1). They retail a range of myths and urban legends on the topic, such as the claim that the media were ultimately responsible for the Port Arthur massacre of 1996:  Should the music industry be allowed to promote music which upholds violence, rape, narcissism, murder and unsolicited drug-taking? Surely we cannot continue to separate a screen culture that celebrates evil from the level of violence and crime we are witnessing?!

Muehlenberg launched a campaign against a cereal manufacturer (Uncle Toby's), because they gave away as premiums, photos of Baywatch stars, including Pamela Sue Anderson.

In New Zealand, Dobson, as he did with Stephen Harper's campaign, directly funded opposition to a referendum that would have made beating your children a crime.


A group behind the "Vote No" bloc in the smacking referendum received around $1m over six years from a conservative American religious group.  That US organisation advocates a return to "Biblical values" and its founder says "a little bit of pain goes a long way" for children.

The disclosure comes as one of the country's top Anglican clergy has condemned the attitude of Christians who claim a "God-given right" to use corporal punishment against their children.  "I am concerned that a particular stance on child discipline has too often been characterised as 'the' Christian view," said the Very Rev Ross Day, Dean of Auckland's Cathedral of the Holy Trinity.

.... On the strength of the referendum vote, Focus on the Family is demanding that the so-called "smacking ban" be repealed. (4)

Don't forget Harper's speech to the Civitas Society, Canada's arm of the Council for National Policy:

"Even foreign policy had become a theo-con issue", he pointed out, driven by moral and religious convictions. “The truth of the matter is that the real agenda and the defining issues have shifted from economic issues to social values,” he said, “so conservatives must do the same. "  Arguing that the party "had to come up with tough, principled stands on everything from parents’ right to spank their children to putting 'hard power' behind the country’s foreign-policy commitments ... " (5)

A 'principled stand' in favour of child abuse.  If you read Dobson's work, he doesn't stop at a simple spanking.  He beleives that Christian males must take dominion over all living things, including their wives and children.

In his book, The Strong-Willed Child, Dobson relates how he took dominion over his dog, a pet dachshund named Siggie, when the animal refused to get off the furry toilet seat and get into his bed.


"When I told Sigmund to leave his warm seat and go to bed, he flattened his ears and slowly turned his head toward me. He deliberately braced himself by placing one paw on the edge of the furry lid, then hunched his shoulders, raised his lips to reveal the molars on both sides, and uttered his most threatening growl. That was Siggie's way of saying. "Get lost!"  I had seen this defiant mood before, and knew there was only one way to deal with it. The ONLY way to make Siggie obey is to threaten him with destruction. Nothing else works. I turned and went to my closet and got a small belt to help me 'reason' with Mr. Freud."


"What developed next is impossible to describe. That tiny dog and I had the most vicious fight ever staged between man and beast. I fought him up one wall and down the other, with both of us scratching and clawing and growling and swinging the belt. I am embarrassed by the memory of the entire scene. Inch by inch I moved him toward the family room and his bed. As a final desperate maneuver, Siggie backed into the corner for one last snarling stand. I eventually got him to bed, only because I outweighed him 200 to 12!"

A 200 pound man can take dominion over a 12 pound dog.  Isn't 'he the man'.  Fitting this horrendous tale to the discipline of children, Dobson explains:


"But this is not a book about the discipline of dogs; there is an important moral to my story that is highly relevant to the world of children. JUST AS SURELY AS A DOG WILL OCCASIONALLY CHALLENGE THE AUTHORITY OF HIS LEADERS, SO WILL A LITTLE CHILD -- ONLY MORE SO." (emphasis Dobson's)

All of us in 'Northern Europe' have reason to be alarmed.  Where Canada stands alone, is that we are the only country in this little group, whose media refuses to discuss Harper's involvement with this movement.

Australia, New Zealand and the U.S. speak of it as naturally as reporting the weather.

Here, just calling Harper a Straussian will get you fired.  Maybe Salutin should have winked when he said it.

5. Stephen Harper and the Theo-cons: The rising clout of Canada's religious right, By Marci McDonald, The Walrus, October 2006
Posted by Emily Dee at 7:58 AM